Send to a friend :

Join us on a life-transforming journey as you immerse yourself in the sights, culture and breathtaking landscape of Israel and Jordan. The Bible will come alive in ways that you never thought possible. Visiting the Lands of the Bible will challenge you to the full.

Bio for Rev Donald N Martin (Gardenstown) who will be leading the tour; 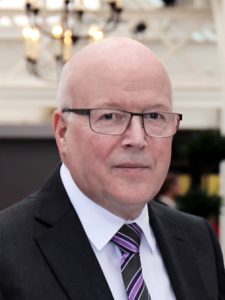 Born and raised on the Isle of Lewis in the Western Isles of Scotland. My Mother tongue is Scottish Gaelic and my early career was in retail and wholesale management 1972-1988.

I became a Christian in 1985, and soon knew my future was to be based in teaching the faith, so I began training for ministry as a second ‘Career’ or vocation in 1990.

I have been minister at Gardenstown since 1995 and due to retire from active ministry this year. God willing it will allow me to follow other avenues of Christian service. Our congregation has been actively supporting missions around the world for many years, providing them with practical and spiritual support.

Over the years my faith has taken me to Israel and Jordan many times, and numerous times as tour leader since 2008. I have preached in America, Africa and Brazil and Israel as well as over 3000 times in Scotland.

I am involved with groups who have Israel at heart, and have regularly had visitors from these groups and from Israel speaking at our church

I have been married to Suzanne since 1982 and we have 3 children; Gillian, James and Douglas. In my spare time (I’ve still to discover what that is,) I like photography, seeing new places, and have also taken a number of cruises to interesting places. 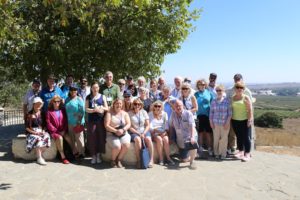 We all meet up in the morning at Aberdeen airport and fly in the early afternoon on a British Airways flight to Heathrow and then to Tel Aviv, Israel on another BA flight. We will be met and transferred by coach to our Tel Aviv hotel on the Mediterranean coast for an overnight stay.

After a hearty Israeli breakfast we will have a tour of Jaffa (Biblical Joppa), the town from where Jonah ran away from God. It is also mentioned in Acts 9-11. From there we visit the ancient port of Caesarea Maritima, Herod’s major sea port and capital. Leaving there we travel to Muhraka which sits on top of the highest peak of the Carmel mountains and where Elijah the prophet encountered the Prophets of Baal. (1 Kings 18) The hilltop site provides sweeping views of the Jezreel Valley, right across to Nazareth and other Galilean sights. Our next stop is Megiddo, the site of epic battles and said to be the Jewel in the crown of Biblical archaeology . Afterwards we visit Nazareth Village where life as it was in Jesus’ day is reproduced. Finally we drive through Cana, where the first recorded miracle of Jesus took place, and to the Kinar Kibbutz Hotel, Galilee for Dinner and overnight.

We begin the day with an early morning Communion Service on the shores of the Sea of Galilee.  We visit the Capernaum the home town of Jesus and to Tabgha (Mensa Christi) – where Jesus had a BBQ on the beach for his disciples after the resurrection. We visit the Mount of Beatitudes where Jesus gave the Sermon on the Mount. There we have a breathtaking view over the Sea of Galilee. It is worth seeing the first century Ancient Jesus boat at Nof Ginosar, and we visit Magdala the home town of Mary Magdalene. We have a break for a St. Peter´s Fish Lunch and to end the day we have baptisms at Yardenit Baptismal Site on the Sea of Galilee. Return to Kinar Kibbutz Hotel.

We begin our day with a beautiful boat ride on the Sea of Galilee. Then we leave the blessed experience of Galilee and we head south through the Jordan River Valley to Beit Shean. This is the site, where after defeating Saul and his sons at Mt. Gilboa, the Philistines hung their bodies on the walls of the city. (1 Sam 31) We enter the ancient city of Jericho where we visit Tel Jerich.  Then it’s up to Jerusalem and we make a special visit to the Joseph Storehouse Millennium Centre. Barry and Batya Segal will show us around and address us. Check in to our hotel in Jerusalem

We walk the streets of the Old City of Jerusalem. From the Mount of Olives, we descend on the Palm Sunday Path, to the Garden of Gethsemane, where Jesus often prayed with his disciples. Then it’s across the Kidron Valley to St. Peter Gallicantu, and on to the Upper Room on Mt. Zion. We enter through the Lions Gate and see the Pools of Bethesda and St. Anne´s church and walk the Way of the Cross. We also visit the Garden Tomb and take Communion together.

We drive out into the Judean desert, visit the Qumran Caves, where the Dead Sea Scrolls were found. We stop at Ein Gedi, an oasis in the desert by the Shores of the Dead Sea and where David took refuge when he was being pursued by King Saul. We ascend by cable car to top of Masada, a fortress built by King Herod and check in at the lovely David Resort Dead Sea hotel to enjoy the Spa, dinner and overnight. There, we will also gather together for Evening Worship.

After a last opportunity for a Dead Sea swim, we drive south to Timna National Park in the Arabah where we see the reconstruction of the Tabernacle in the Wilderness. Jotbathah mentioned in and Deut 10:5 Num 33:34 is in that very area.

We cross into Jordan at Arava Border and will have time for some duty free shopping in Aqaba.

We head north again for a full day tour of Petra, surely one of the world’s greatest sites and officially one of the 7 wonders of the modern world. The spectacular RED ROSE CITY includes the world famous Al Khazneh and the equally wonderful El Deir. The entrance walk and exit through the Suq is truly memorable. Dinner and overnight at Nabatean Castle Hotel Petra.

Leaving Petra we head for the Makawir Fort (Machaerus). This was yet another of Herod’s palaces and where John the Baptist was beheaded. We visit Madaba the city of mosaics (St. George Church.) Madaba is home to the famous 6th century Mosaic Map of Jerusalem and the Holy Land. With two million pieces of vividly coloured local stone, it depicts hills and valleys, villages and towns as far as the Nile Delta. We visit Mount Nebo to see the incredible view of the Promised Land which Moses saw, but never stepped into. Jericho, Bethany beyond the Jordan and Elijah’s Hill is nearby. On a clear day the Mount of Olives and the tall building of Jerusalem can be seen.  Overnight in Amman.

Early morning transfer to the airport for our return flight home with a life time of memories. We fly from Amman to Heathrow and then onto Aberdeen.

Included
Return British Airways flights from Aberdeen to Heathrow and then Heathrow to Tel Aviv.
10 nights Half Board hotel accommodation in Israel and Jordan in a twin or double room with 2 sharing.

Fully guided tours and airport transfers on a private air-conditioned coach.
All entrance fees to the attractions.
Porterage at hotels.

Please note
Single person supplement is £645.
British passports must be valid for at least 6 months from date of departure from Israel/ Jordan.
No visa is required for Israel. Jordan visas will be arranged by us.
Full terms and conditions are on this link –
https://www.toursforchristians.com/booking-conditions/

There is a reasonable amount of walking involved so you should be able to climb two flights of stairs.